Honey, I know what side my bread is buttered on...

...that is why not one single time in this post will you hear me say "I told you so." No siree, not once...

My wonderful hubby has degenerative disc disease. It is a common because, unfortunately, it is a natural part of aging. Basically, the discs between the vertebrae break down over time causing pain. And although wonderful hubby is still young, 15 years of basketball is catching up with him. He was diagnosed last spring after a horrible night of pain with no apparent cause. After a doctor's visit and spine adjustment, he started feeling better. Of course once you start feeling better, you lose the mojo to do what you need to do to "fix" it, a healthy diet, exercise and supplements. After almost a year of no problems, last week was BAD! We now have 6 weeks of therapy, a barrage of supplements, an exercise plan after therapy and the order to lose 15 lbs. Sound familiar? Two sentences up, the wifey's plan for health? Nope, no told ya so here.

Now that we do not have a choice, we are trying to avoid dieting and make some lifestyle changes. We are 50/50 on the healthy meter, we just need to crank it up. I have two recipes that may help. One absolutely wonderful and one that, well, let's just say, I tweaked a little too much and wound up with great flavor but a funky color. There are pictures scary purple people eater pictures.


Is That Color Found In Nature? French Onion Soup

Hubby LOVES French Onion Soup but it can be a not so friendly option. I made a few easy and delicious changes; however, one subistitution added bold color... a description better suited for a wall. 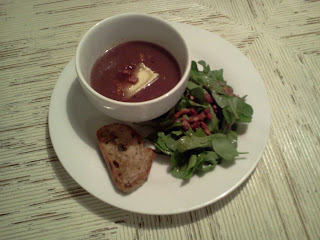 The recipe is:
2 lbs medium onions
1 tsp of fresh rosemary
2 bay leaves
3/4 tsp of salt
1 tbsp olive oil
2 tsp flour
1 1/2 c white wine
Ok- we are pressing pause for one second to explain the funky color. Hubby and I were drinking the white wine. It was delicious and who knew using red instead would cause our soup to look like it belongs at an ECU tailgate party so we kept sipping. In went the red and out came purple, Crayola could not be more purple if I tried purple. SO- stop sipping the white and dump it in instead.
4 c reduced sodium beef broth (chicken will work but it will not have the rich meaty flavor)
1/2 tsp black pepper (I love black pepper so I added more)
Peel the onions, half them down the length and slice them thinly. In a dutch oven, cook the onions, rosemary (thyme can be substituted), bay leaves and salt in the olive oil over med low heat, uncovered, for about 45 minutes, stirring frequently. The onions should be soft and golden brown. Add flower and cook for approximately 1-2 minutes cooking out the raw flour taste but not letting it get too brown. Stir in the wine and cook for 2 minutes. Stir in the broth and pepper and simmer uncovered for 30 minutes stirring occasionally.
I did not add the bread and cheese and bake in the oven. I placed a slice of brie over the soup just before serving and it was warm and gooey. And had almost the same effect, almost, but definitely not bad for a "knock-off" version. Oh- mistake number 2- I blended the soup. No, No, No!! It changed the texture too much. I was hoping to give it a creamier feel, don't do it. Bad idea. Step away from the blender and serve as is and you will not be disappointed.
I have lentil recipe that is divine in post number 2. :)
Posted by Jody at 12:44 PM

Jody
Married to the greatest friend a girl can have and a 5 pound furbaby who rounds out the mix.