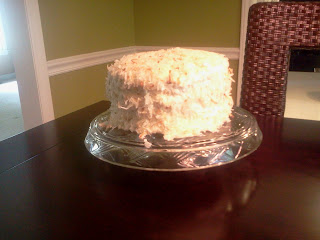 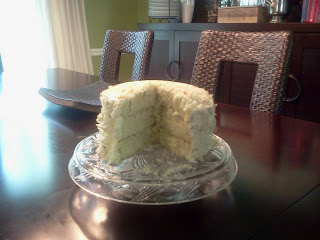 Yummy Lemon Coconut Cake!!!!
Lent was a lllllooooonnnnnggggg 46 days so I celebrated by making lemon coconut cake for Easter Dinner. Yes- That was dinner. OK, so I did actually make an Easter Dinner but I dreamt about this the whole week before.
I am not a baker by any means. Bread has gone straight from the oven to the trash but I was still excited (and brave) to try this cake. I had to forgo the wonderful coconut cake at the Peninsula Grill in Charleston when I was there during Lent so this was my make up cake.
I was nervous but I found that this cake with all of its glorious fatty deliciousness was easy and divine.
My lemon came from lemon curd that I used as icing between the layers. Although I have made lemon curd from scratch in the past, we were going for ease since there was another entire meal to be made.
The frosting was a cream cheese frosting that I modified just a bit and may never be able to make again. :) But I will try and promise to write it down this time. The cake recipe is below.
Coconut, coconut, yummy yummy coconut. Everybody sing.... okay maybe not.... :)

-Beat the butter at medium speed until fluffy. Gradually add sugar, mixing well. Add egg yolks one at a time, beating after each addition.

-Combine flour and baking powder , add to butter mixture alternately with milk beginning and ending with flour mixture. Beat at low speed until blended after each addition. Stir in 1 teaspoon of vanilla.

- Beat egg whites and salt at high speed with an electric mixer until stiff peaks form. Stir about 1/3 of the eggs whites into the batter; fold in remaining egg whites.

-Spoon batter into greased and floured 9" round cake pans.

-Bake at 350 degrees for 18-20 minutes or until a wooden pick inserted in the center comes out clean. Cool in pans on a wire rack for 10 minutes. Remove from pans and cool completely on wire racks.

- Spread lemon curd in between layers. Spread frosting on top and sides of cake and sprinkle with coconut.


I like the idea of using lime curd in between the layers but that just opens the door to having a certain song stuck in your head all day long...

Jody
Married to the greatest friend a girl can have and a 5 pound furbaby who rounds out the mix.